June 11, 2011
Last week I was able to get my hands on one of the Windows Phone devices - Samsung Focus.  I have been an iPhone user from iPhone 1 and prior to that I used to use Windows Mobile devices for years.  Even though there are abundant reviews of both devices I felt like I should create a review of my own.

For those of you who do not want to read through the whole post I'd like to say: iPhone 4 is still the best smartphone I have ever used.  Samsung Focus is not terrible, but there are a lot of little things missing and after an accumulation of all the little things you end up with a strong desire to switch back.
I wanted to construct this post not as a way of knocking on the WP7, but rather as a roadmap for the evolution of the device and the OS.  First the good things about the WP7:
1) Windows Phone 7 OS got the GUI right.  It's a pleasure to use and it works well on a mobile device.
2) Integration with Facebook is a great.  I love the linking of contacts and updating of information.
3) I like the fact that I can get to the camera right away - that's very handy.
4) The lock screen has information about schedule and e-mails.  That is very useful.
5) Speakerphone on the Focus is great, I think it's better than the iPhone 4.
6) The fact that Calendar, Contacts and E-mail are all integrated with Windows Live was a step towards iCloud before the iCloud.
Here are the things that need work:
1) Get a better device. 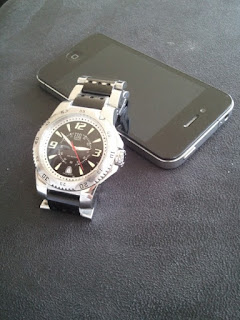 You can tell the difference between the actual hardware when you hold a Samsung Focus and an iPhone.  The first is a Ford, the second is an Audi.  Attention to hardware detail is just not present in the Focus.  It's plastic, it's bigger than the iPhone and it not well polished.
Microsoft launched with 5 different phones and not one of them was better in hardware than the iPhone.  What they need is nice metal and glass that are tightly fit together.  They need retina display.  They should have screws that are polished and tight.  Microsoft needs to press on their hardware partners to produce a beautifully polished device.  The device needs to feel like a Swiss watch in order to compete with the iPhone.  The phone has become not only a mini computer but also an accessory.  If the phone doesn't feel like an ESQ watch - I don't want it.  The bar is already that high.
2) Apps
Windows Phone 7 apps are seriously behind.  There are a ton of apps that are missing.  I couldn't find Mint, DailyBurn, Skype, Evernote, Chase and other apps I use all the time.  Some of the apps that were there, such as Facebook and Twitter, were subpar.  For example: twitter didn't have a way to search or load my saved searches.
Microsoft needs to take the strength of its evangelism team and apply it to the leading iOS applications.  They should seriously just build a Facebook application that beats the iOS Facebook application. They should create a Twitter application that is faster and better than the iOS equivalent.
I understand that the reason those apps are non existing or subpar is not Microsoft's fault, but it is their problem.
3) Marketplace
I could not effectively find things on the Marketplace.  Apps, PodCasts, Music are all collapsed into one search result list.  There is no way to filter that.  For a person who is switching from an iPhone its important to find a particular application.   When I am looking for Zen podcast I accept that the first result set might be everything including music, but I need to be able to zoom in on podcasts.  That was not possible.
4) Search
I am using Bing as my search engine on my iPhone and I've been very happy with it.  However I can't say the same about the Bing Maps built into the Samsung Focus.  For example: the map has ignored my current zoom area and proceeded to give me results that were outside of the zoom.
Another example is when I searched for SFO while being zoomed out to see the entire Bay area the San Francisco International Airport (SFO) was not in the first ten results.
Overall I have to say that the strategy of catching up with the iPhone is failing.  Apples fantastic hardware design and a myriad of apps that are being built for iOS first make that an uphill battle.  I believe this strategy is going to get Microsoft close:
1) Get Nokia to create a fantastic device.  Swiss Watch quality metal, glass and precision.
2) Use the Billions of dollars to fund or create amazing applications.  Fund promising applications so that they are polished and beat the iOS ones.
3) Fix the Marketplace and get a freemium Zune subscription.
4) Use the phone data to provide better, precise search that tailors things to the device.
I believe there are a couple of other things in motion that might give Microsoft an edge by addressing another Market.
1) XBox - if they follow step #1 from the strategy above and create the best gaming phone that connect to XBox they have a chance to capture that niche.
2) Skype - adding the capability of calling overseas at a reduced rate and to start using SkypeIDs instead of phone numbers would be a great differentiator.  This could make Windows Phone devices the most valuable device for an international caller.  The question is of course whether the carriers are going to go for it.
In closing I'd like to say that WP7 is a great step forward.  If they follow the strategy they did in the fight against Sony and Nintendo I think eventually it might take the lead.  They do need to keep in mind that Apple is very sharp competitor and the recent iCloud announcement shows it.

Jason said…
Good review Mike! I've wanted to try the WP7 but now I don't have to. I think MS has good upside and maybe I'll look back at them for WP8, until then I'm headed for the Iphone.
10:31 AM